Spanish Hiatus – When to pronounce the vowels separated + Examples

Hiatuses are an important part of the Spanish language. Recognizing Spanish hiatus and knowing when to pronounce the vowels in the same or different syllable will boost your pronunciation. And isn’t as difficult as you think!

Before you read the end of this post, you’ll have a clear idea on how to recognize hiatus in Spanish and how to pronounce them.

In the previous post (Diphthongs and Triphthongs), you’ve learned when 2 or 3 vowels should be pronounced in the same syllable.

What is a hiatus?

As you might know, Spanish hiatuses are vowels which are written side by side but pronounced in separated syllables.

How to recognize Spanish hiatus

Read the story below (part 4) to remember easily how to pronounce a hiatus.

But before that: do you remember the story of Alberto and Milu?
Read parts 1, 2 and 3 of the story here.

Here’s a short summary, in case you haven’t read it or don’t remember:

Alberto is a big and strong elephant and Milu is a tiny mouse who wanted to pursue his own path and get his own home. The problem was that Milu was so hungry and weak that he needed to stay close to Alberto to eat his leftovers and get some energy.

It was Friday evening. Milu was super hungry so he started looking for something to eat. «Another weekend of hunger» -he thought. It was raining. He looked through the window when suddenly he saw it. A piece of cheese (tilde)! And it was a big one.

After few bites Milu got very energetic and -like Super Mario when he eats mushrooms- the tiny mouse suddenly grew → (í, ú).

When Alberto came back home, he saw Milu. (As you know, for some strange reason, elephants are afraid of mice). 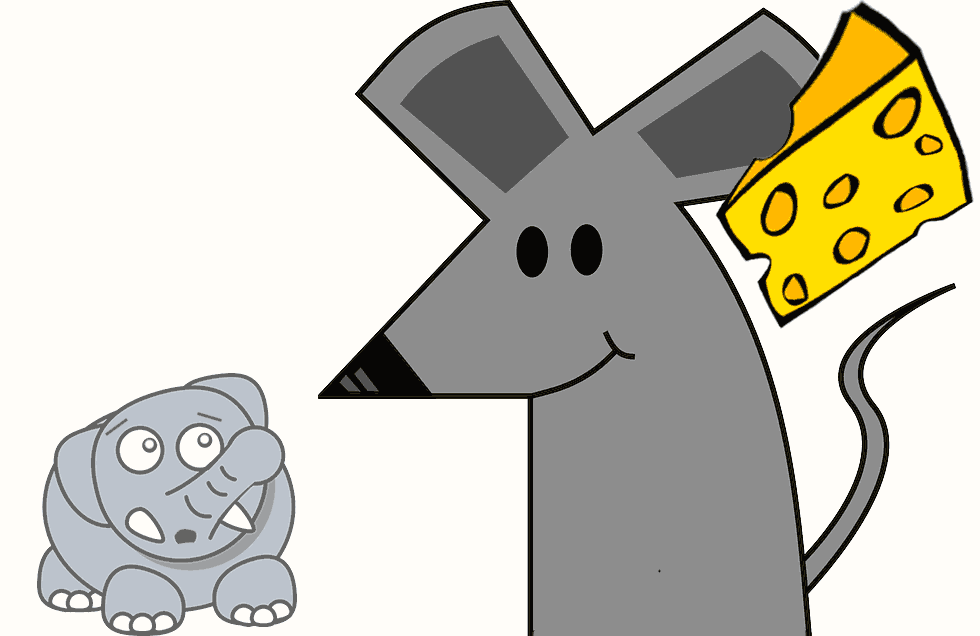 Alberto run away and Milu got his own house (syllable), becoming the protagonist of his own story.

Under normal conditions, Milu’d had invited his mouse girlfriend into the house but the circumstances had changed:

Milu had his own house and a big piece of cheese. And he didn’t want to share any of them so he broke up with his girlfriend. Love for cheese is the strongest love. What a selfish mouse!

This means that closed vowels with a tilde (í, ú) get independent of the rest of the vowels: they’re pronounced stronger and separated from the other vowels.

How to pronounce 3-vowel hiatus

Triphthongs aren’t very common in the Spanish language so when you see 3 vowels side by side, most likely, they will be pronounced in different syllables.

You must pronounce the 3 vowels in the same syllable (diphthong) only in one situation: 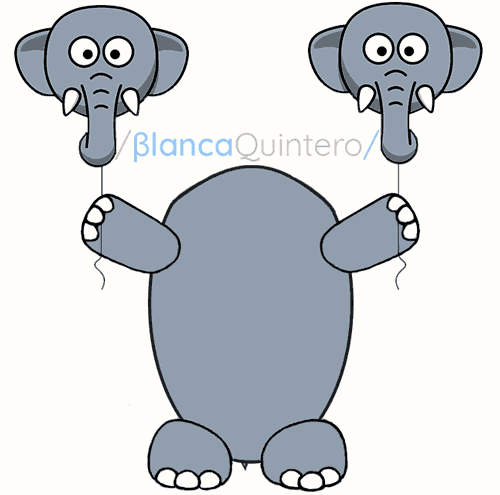 a) 2 open vowels side by side:

Why can’t 2 open vowels be pronounced in the same syllable?

2 elephants (open vowels) don’t fit in 1 little house (syllable) because they’re too big so each elephant has its own house → Hiatus. The 2 open vowels are pronounced separated (le.éis, pe.le.áis, cre.éis).
However, Milu (closed vowel) is weak and small so he needs to stay with Alberto → Diphthong.  The 2 vowels are pronounced in the same syllable (le.éis, pe.le.áis, cre.éis)

b) 1 closed vowel with an accent mark:

Why is the closed vowel (í/ú) pronounced in a different syllable this time?

What you see this time is not Milu (i/u); it’s Super Milu (í/ú). Any elephant would be scared by a big mouse like him. Alberto isn’t different from the rest of the elephants so every time he sees Super Milu, Alberto runs away → Hiatus (ba.hí.a, hu.í.a, cre.í.a).

Once more Alberto’s run away from Super Milu. Alberto gets another house and tiny Milu follows him. Alberto doesn’t see little Milu so Alberto can’t be afraid of him and, as you know, little Milu’s weak and needs to stay with Alberto if he wants to survive (es.ta.rí.ais, ha.rí.ais, cre.e.rí.ais).

To recognize a hiatus you only have to answer 2 questions:

If you have answered yes to any of these questions, then you should pronounce the vowels in different syllables.

Could you say how to pronounce the word huíais and why?

6 differences between English and Spanish vowels

Subscribe to get your free Spanish pronunciation guide, receive selected content and exclusive promotions -only for members of this community.